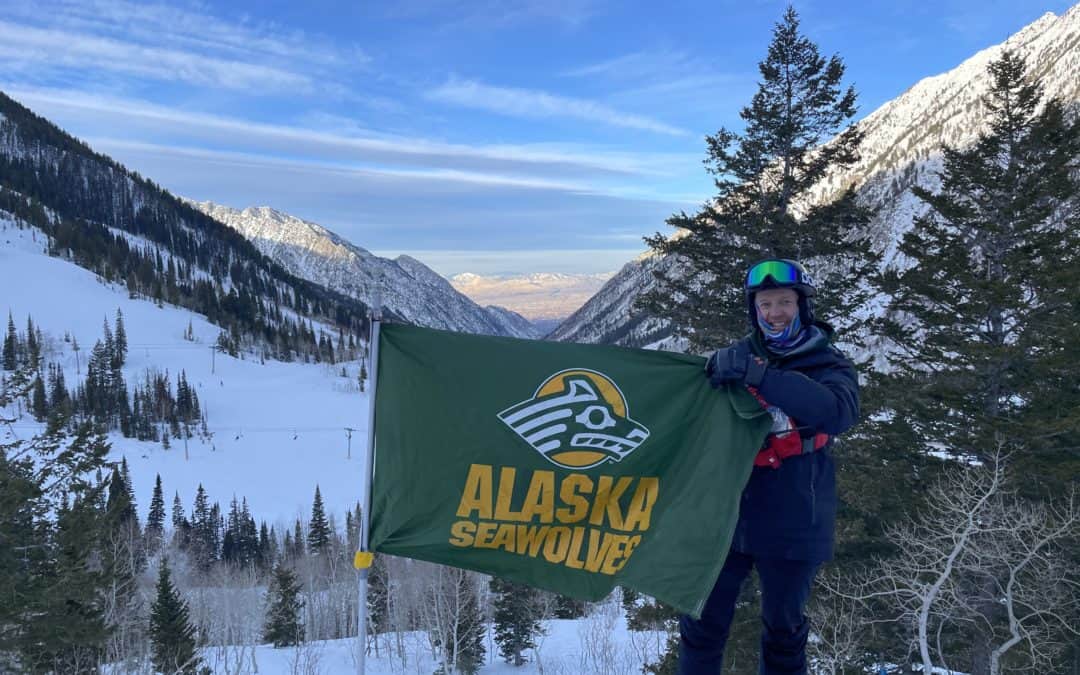 The UAA ski team is incredibly fortunate to enjoy the dedication, tenacity, and service of two volunteer coaches for the better part of two decades. Adam Verrier and Morten Kjerland have given countless hours, days, weeks, and likely years of their lives to the Seawolf Ski Team. Morten was a star Alpine skier at UAA from 1995 to 1999, and has been with the program in an official capacity since 2007.  Adam began his tenure on the Nordic side of the program in 2001 to provide some pace for Trond’s men, and has now expanded his breadth of utility into the Alpine group’s November camp. He also has his own blog, and does a great job chronicling the Seawolf experience.

For those of you who do not know Adam, he hails from New Hampshire, skied for the University of Wyoming Cowboys, and is a Team USA Olympian (Lillehammer, Norway 1994). None of these things define who Adam Verrier is. Adam is a musician, a connoisseur of experience, deeply interested in anyone lucky enough to engage him in conversation, a rural Alaska home appraiser, and an avid clothing-optional motorcycle operator.

I had the good fortune to intersect with Adam when I was the interim Alpine coach at UAA in 2001-2002. There wasn’t a lot of Alpine-Nordic crossover in those days. It would be several years later when our paths converged again – this time, from desperate necessity. I was shy one coach for our annual November camp, at that time conducted in high-altitude Colorado to train on firm man-made snow. I needed help on short notice and had exhausted all the obvious options. It was 7 pm at home, two nights before departure, and I’m scrambling to find solutions. My wife Diana casually says, “why don’t you call Adam Verrier? You always tell me how much he likes to Alpine ski and you guys seem to get along well.”

“Adam!?” I scoffed. “He’s probably riding his motorcycle through the Arizona desert with little to no clothing on.” It was early November…his time to check out. 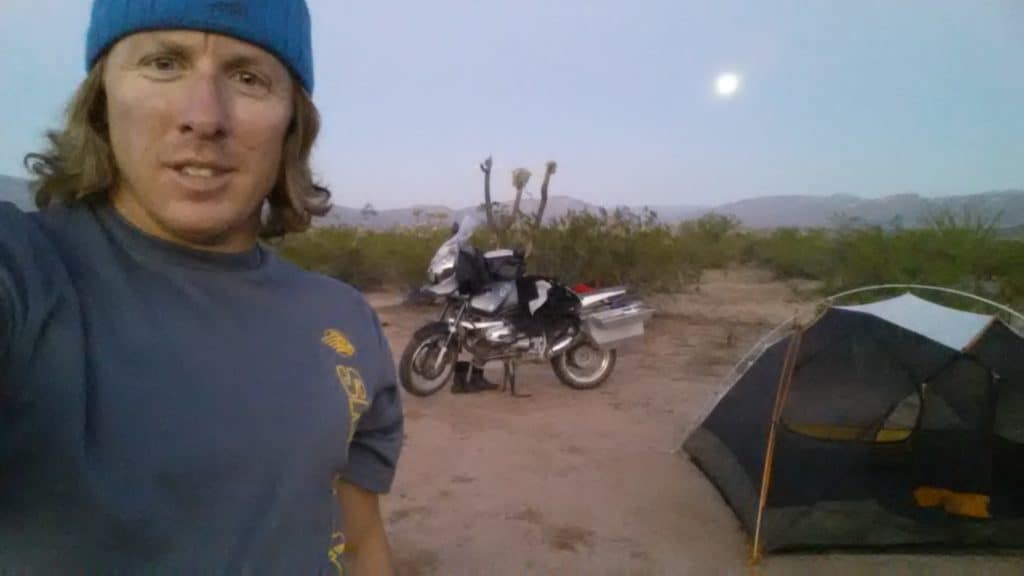 Adam. Full moon in the desert. Seriously contemplating a lifetime commitment to the UAA Ski Team – ONE TEAM – Alpine and Nordic.

Diana gave me a look. Immediately, I picked up the phone and dialed Adam’s number. “Adam!,” I said. “You picked up!” The connection was scratchy but the voice was Adam’s. “Sparky! Great to hear from you. I can’t believe I have cell service here.” We had the usual line of questioning. I wished I had put down money on his whereabouts. “Hey! I’m just riding my motorcycle in Arizona. Strange you caught me. I only stopped to put some clothes on. It’s Tarantula migration season here. Spider guts, all over me.”

I tried not to think about the Tarantulas and asked him to consider riding his bike north into Colorado. Maybe work our camp? Fewer spiders at 11,000 feet. The reply was a fast no, but he continued “…if you can get me a ticket from Las Vegas to Denver and pick up some ski gear from my house I’ll meet you in Colorado.” Score! Adam pulled a U-ie and cut his Easy Rider expedition short. Peter Fonda and Dennis Hopper would not have approved, but for the past ten or so years he’s made a lot of UAA Alpine skiers very happy. Adam is now a regular at our fall camp, and occasionally fills in for us on the Alpine side when we need additional staff. 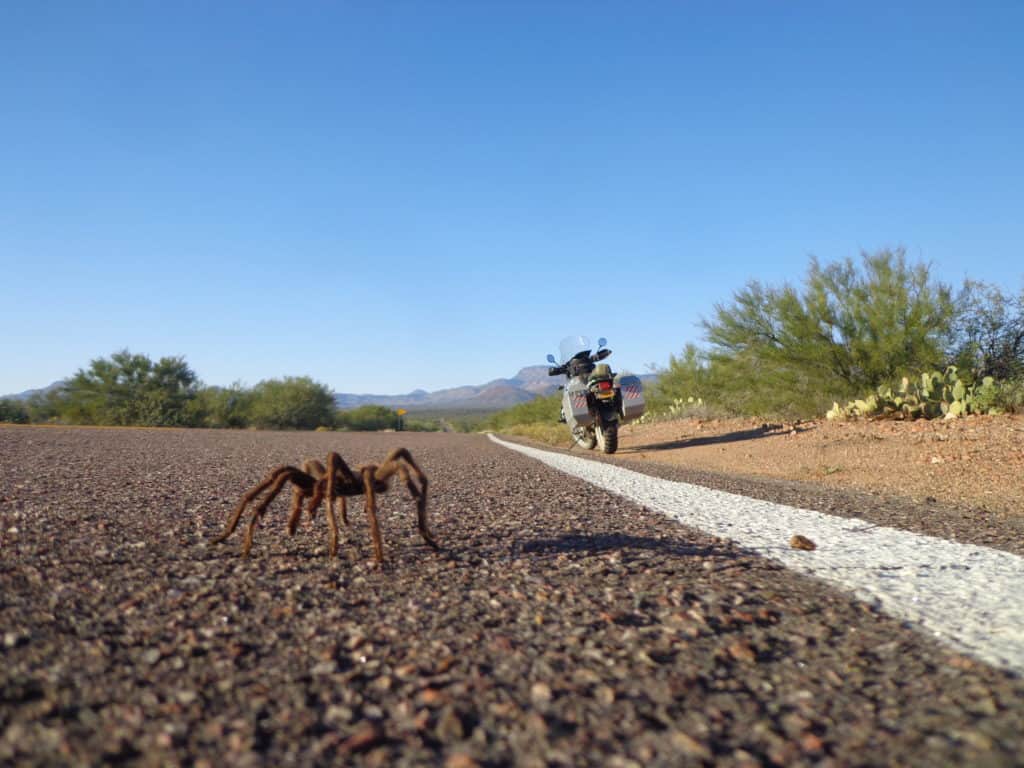 Better stop and put some clothes on…

The first time I met Morten was the spring before I took over the UAA Alpine team full-time in the fall of 2007. Imagine a mild mannered Norwegian, which might be difficult, but give it a shot anyway. Now imagine that same tranquil soul dressed as rock legend Slash from the 80’s hair-metal band Guns ‘N Roses. A costume was required to compete in the Brian Russell dual slalom, a local race benefiting a scholarship fund for aspiring youth ski racers. Adorned as a rockstar, Morten introduced himself, provided a brief personal history, and I’ve never been able to take him seriously since.

Ski racing is a big family. We all have a lot in common. One conversation led to another, and for the past 15 years, Morten has spent nearly every winter weekend and almost every NCAA Regional and National Skiing Championship event in a Seawolves uniform. His experience is invaluable, but the true impact on our student athletes is the perspective he brings to the group. As an elite athlete in Norway, he was hand picked to forerun the 1994 Olympic speed events in Lillehammer. Recruited by the UAA ski team, he finished his college career as an NCAA championship qualifier while earning a double major in business and finance. He was inducted into Alaska Journal for Commerce’s “Top 40 under 40” class in 2014, and now balances raising two kids, a career in finance, and a full-time volunteer second job.

Adam and Morten often conspire to unionize. They demand better wages, complain about never receiving a raise, and protest the absence of hazard pay on those below zero days. On the Nordic side I’ve seen Adam slaving away many a late night waxing race skis, after a long day of testing race skis, after a long day of coaching racers on race skis. At our Alpine events, Morten is first on the hill to dig a start pit, band up each pair of GS skis, and put the magic into every detail of final base prep before the first athlete leaves the gate. Twenty years later, I can truly say that Adam and Morten are both Spiderman superheroes and bonafide Rockstars. Simply put, we couldn’t do it without them. 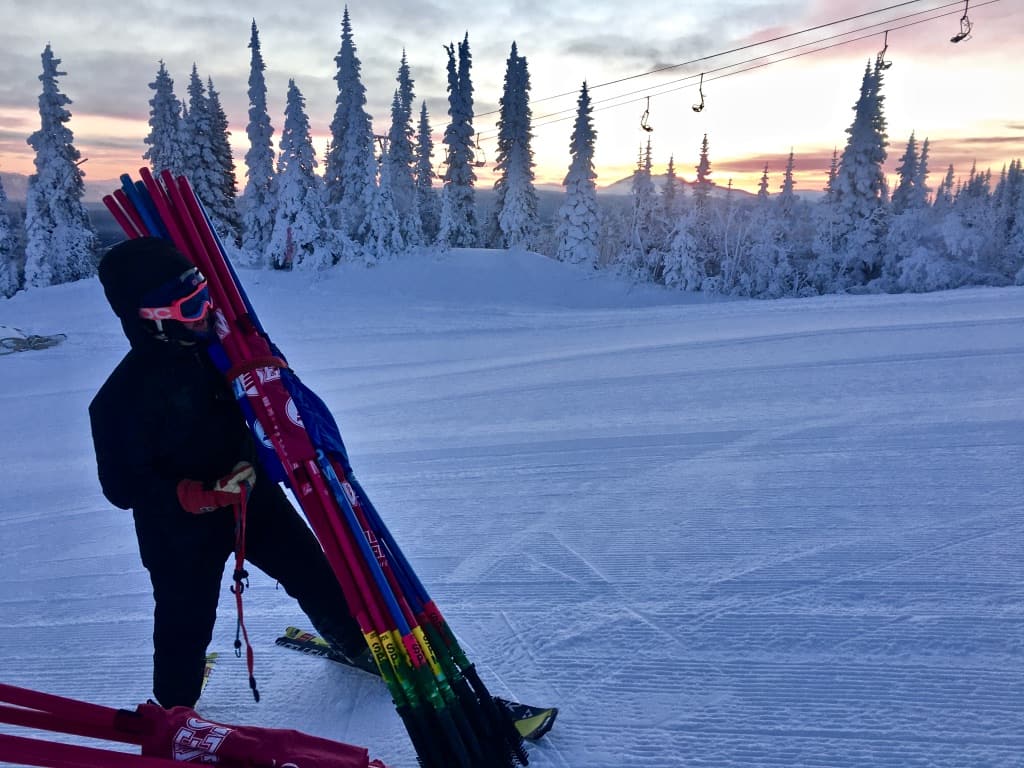 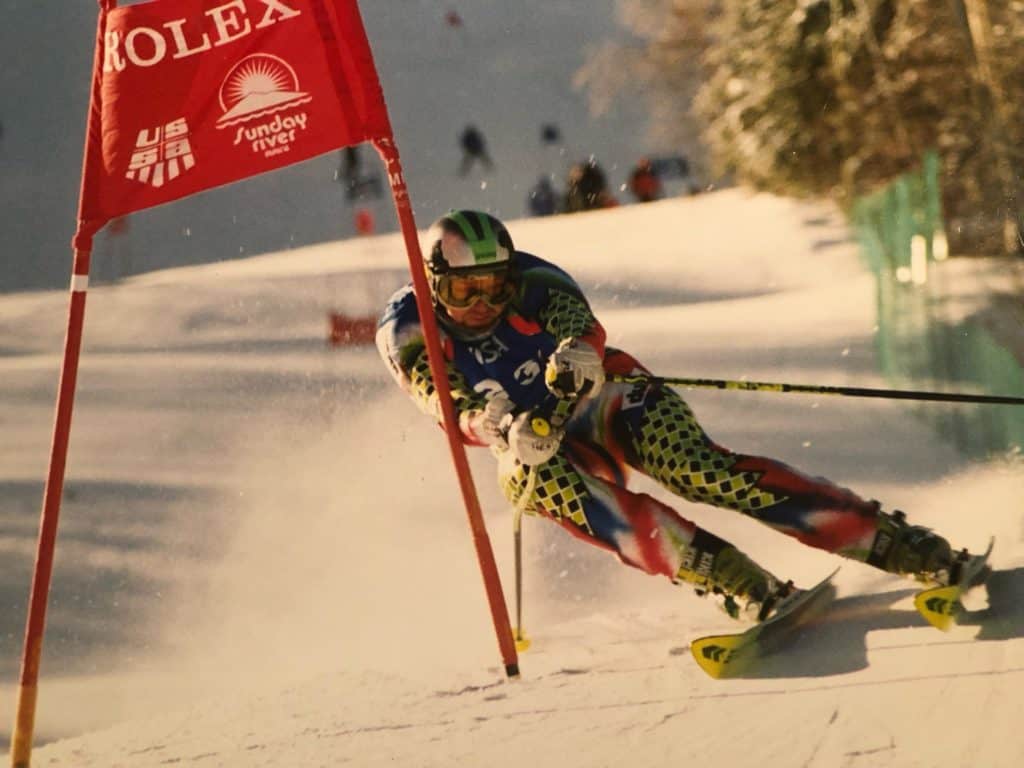 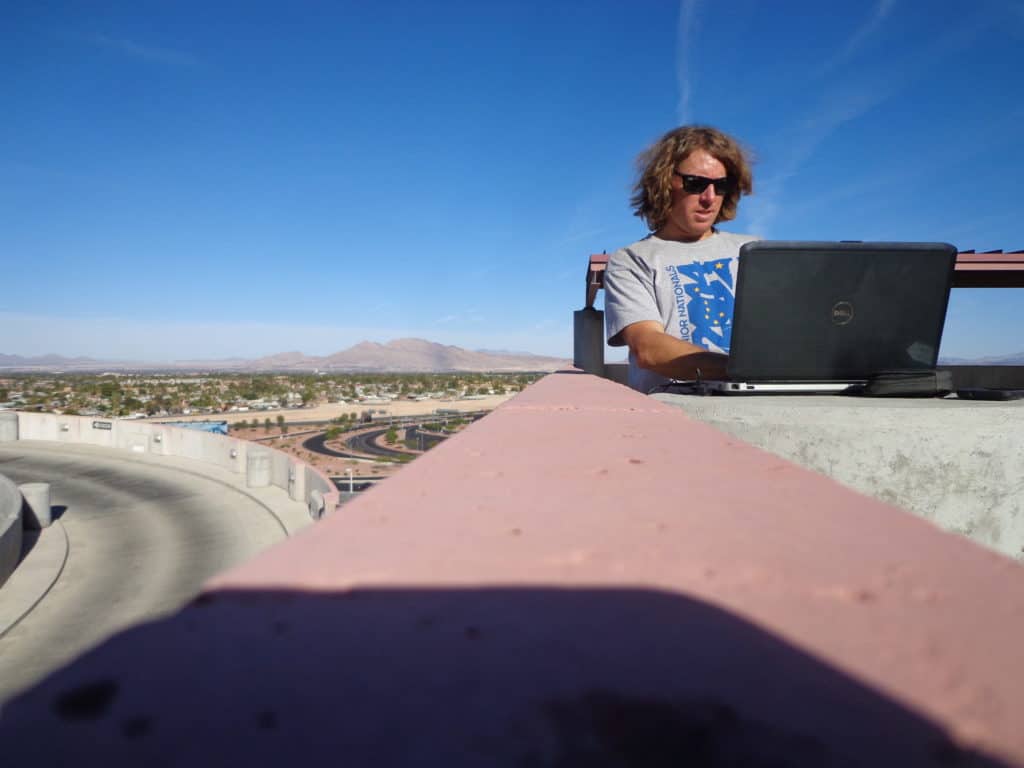 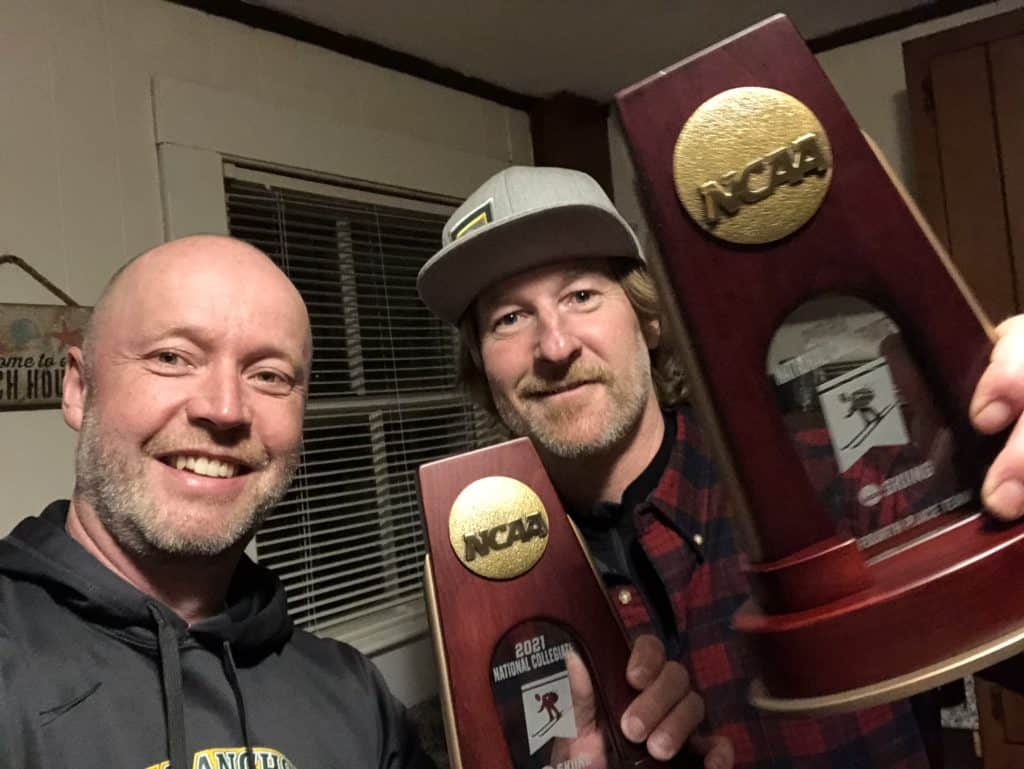 Better than any payday. Way better. 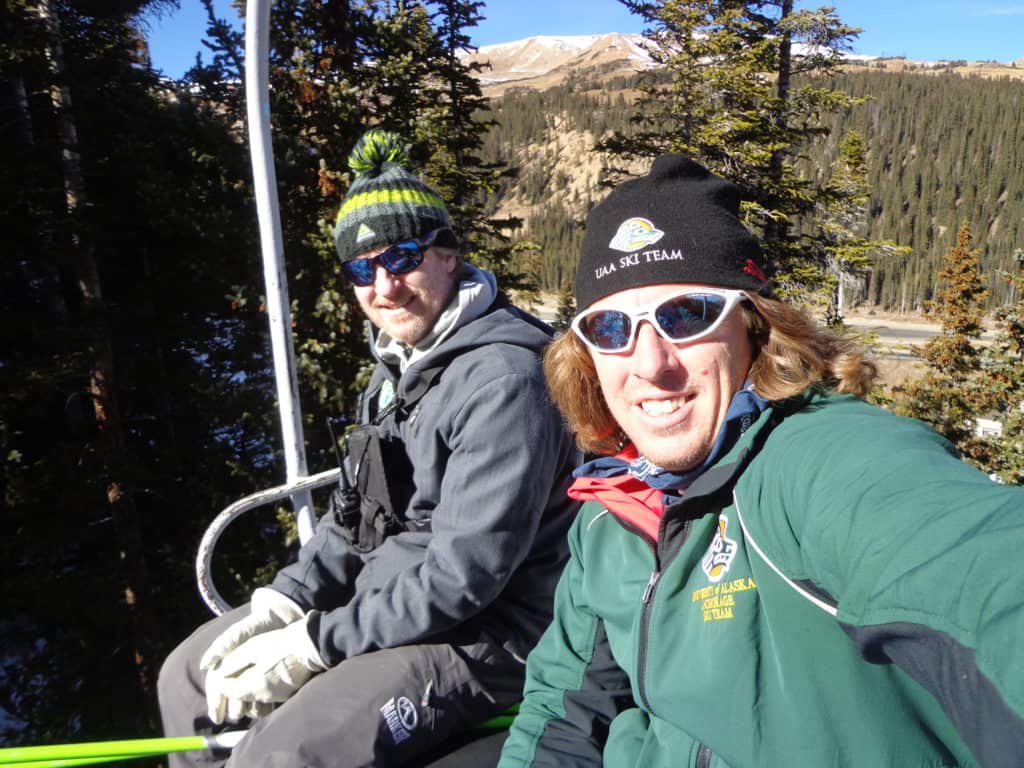 There is never much snow in Colorado. You can definitely ride a motorcycle here in November.