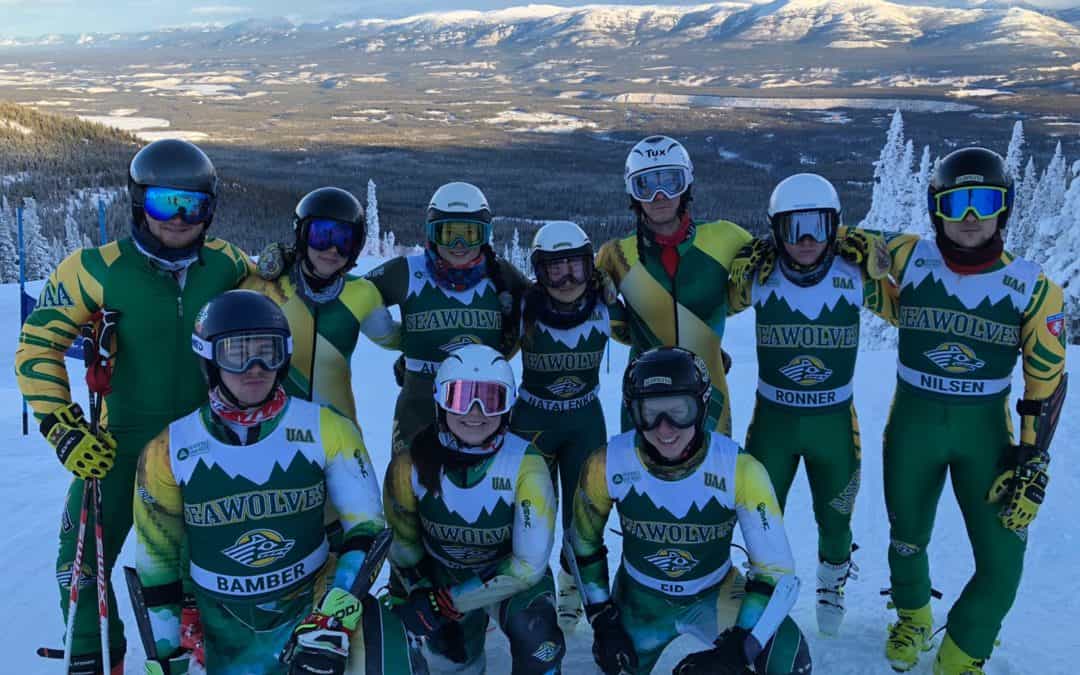 Anchorage, Alaska to the frontier town of Whitehorse in the Yukon Territory is 704 miles. The highway is mostly paved, but long stretches of gravel covered in packed snow make an occasional appearance between Tok, Alaska and Haines Junction inside the Yukon. Frost heaves buckle the Alcan a few miles past Glennallen, about three hours deep into our 12-hour journey. If you’ve never experienced a proper frost heave at highway speed, you’re missing out on the true value of a quality seatbelt.

Somewhere around Chistochina, between Gulkana and Mentasta Lake, the frozen pavement pitched sharply into rollercoaster camel bumps. Leon, Hunter, and Jan traded weightlessness with being slammed against the roof and bottoming out the seat cushions in the back of our Tundra at 30 second intervals for a solid hour. Welcome to Seawolf Nation.

The border was our real wildcard. Canada requires all foreign citizens to be fully vaccinated and provide a negative molecular COVID test taken within 72 hours of arriving at customs. To be extra sure, I received a Moderna booster, got a flu shot, tested negative for COVID, and had my teeth cleaned at the dentist. I was pretty sure the Royal Canadian Mounted Police were going to admit me. My athletes on the other hand? 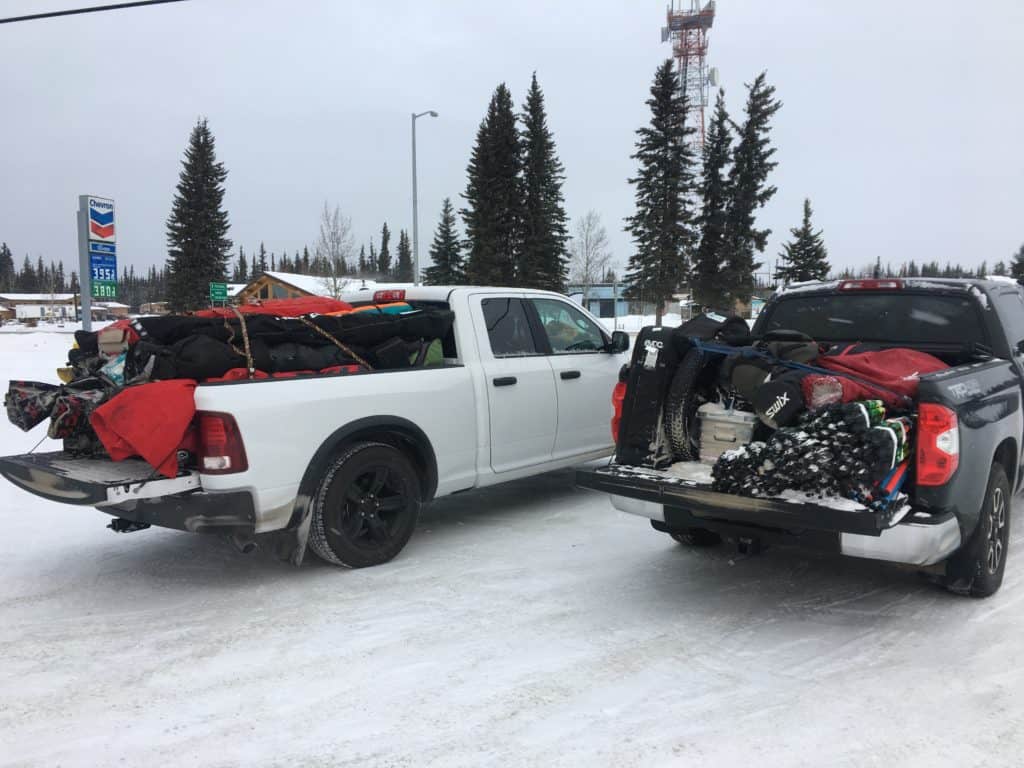 Pulling out of Tok, I heard something resembling “oh crap” from the back seat. An athlete, to remain nameless, named Leon, forgot the official copy of his negative COVID test. Canada doesn’t specify if the “proof of a negative molecular COVID test taken within 72 hours of arriving at the border” needs to be an official copy or a photo. Cell service emerged at the Young’s Chevron in Tok, but that luxury ended the second we pulled out of the gas station parking lot. A few frantic calls to roommates produced a texted photo of the delinquent document. Five minutes behind schedule, we set off to the east and hoped the RCMP appreciated college photography.

The border crossing was uneventful. Our Mountie was a perfect gentleman, and three fully loaded pickups piled high with equipment and international student athletes slipped into the vast Kodachrome of the Yukon. November doesn’t provide an abundance of daylight, but we bathed in what remained of its brief manifestation. Twilight finally succumbed to a thick blanket of darkness an hour south of Destruction Bay, providing just enough light to enjoy sweeping views of Kluane Lake’s angry turquoise windswept waves. 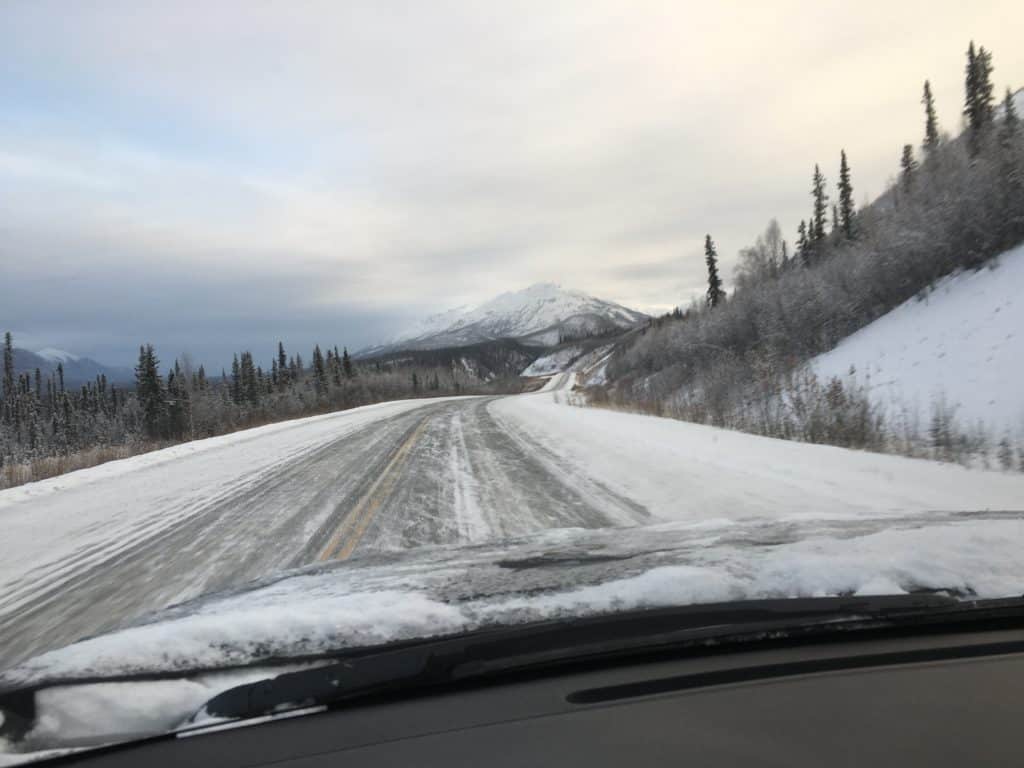 Eastbound and down, loaded up and truckin’

Team banter inside the truck turned our 12-hour journey into an easy drive, but the real work started when we wheeled into Whitehorse. Our team is being hosted by local families of past and current Seawolf Ski Team athletes. The Yukon has produced some fantastic Nordic skiers over the years, including Natalie Hynes, Marcus Dueling, and Derek Dueling who made their way to Anchorage to ski on the competitive NCAA circuit. For 17 days, the Hynes and Dueling households will be empty nesters no more. I only hope they know what they signed up for. 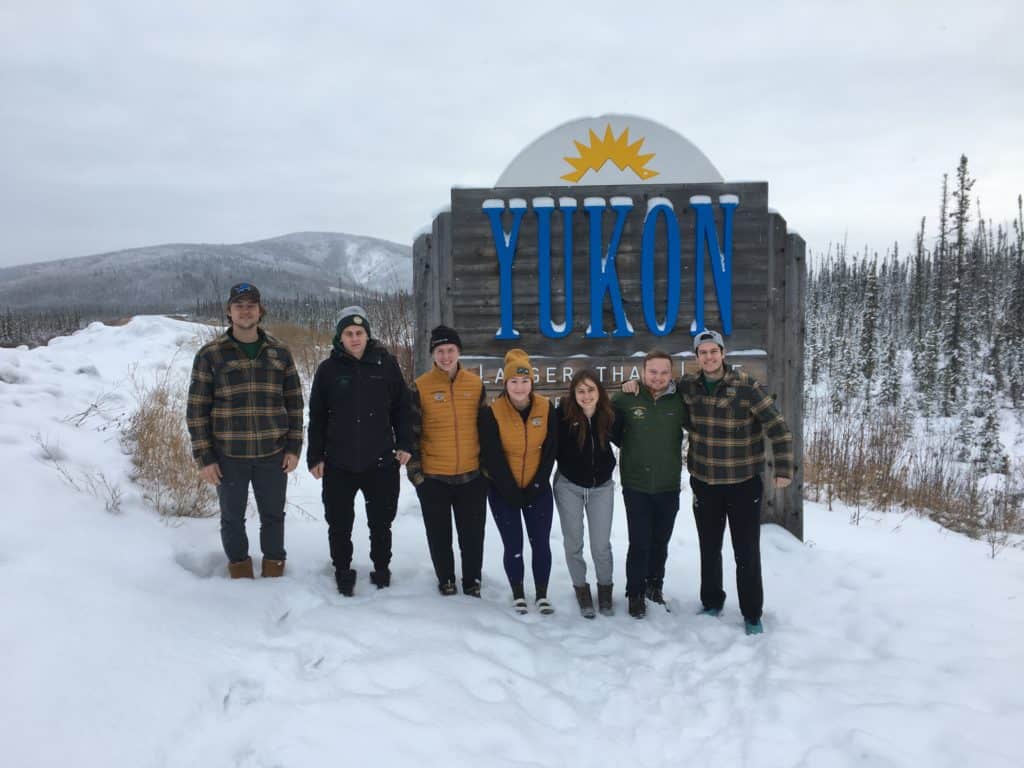 The plan was to leave Anchorage at 6 am and pull into Whitehorse by 7 pm. Somewhere in the noise of COP 26, COVID, and the World Series, I missed the memo of the Yukon opting out of Daylight Savings Time. Seven o’clock flipped to eight, and I found myself scrambling. After dropping the team at their new homes, the coaching staff mounted a massive grocery expedition, unloaded gear, and the created new office and equipment rooms where drills, radios, cameras, and timing equipment peacefully coexist with laptops, printers, and scanners. A soggy midnight salad kit dinner preceded a highly anticipated lights out. Short nights and early mornings are common on travel days.

We’ve now completed the first five-day block of our three-block camp. Two days of drills and directed free-skiing bled into GS sections and finally a full-length race simulation. Progress comes in many shapes, but our ten student athletes are giving it all they got. We’ve opted to stay with GS into Friday. We’ll have the entire hill to ourselves, and it’s tough to pass up any opportunity to run a minute-ten 45-gate giant slalom. The team is taking today to catch their breath. Exams need to be proctored, bodies need to recharge, and feet need to thaw. As our camp heats up, the temperatures are forecast to plummet. Time to light some fires.