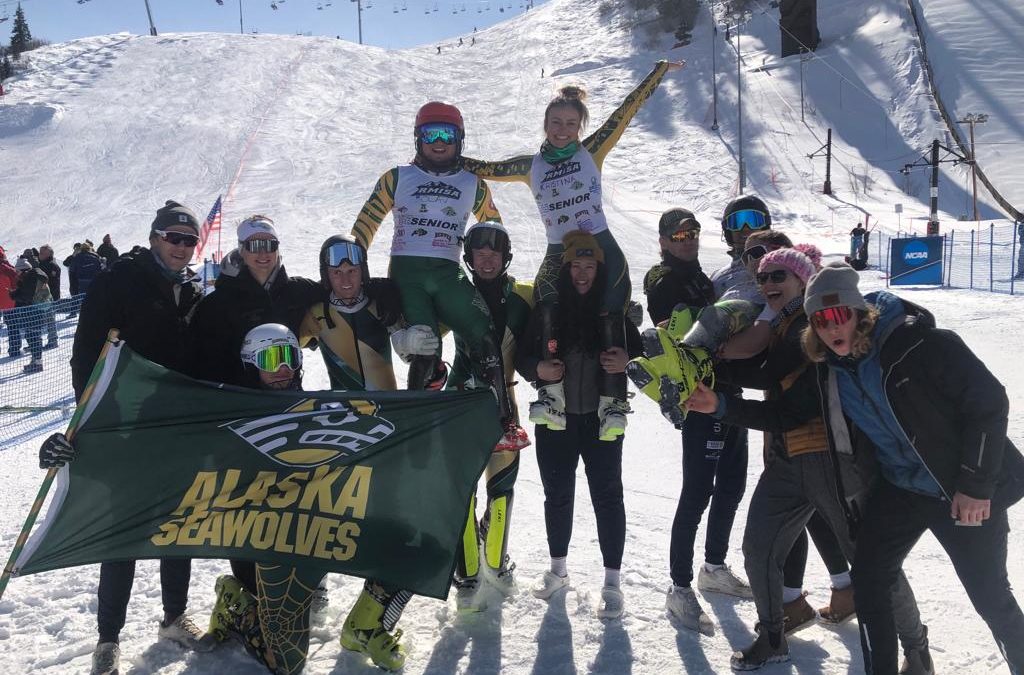 A lot of planning goes into a season of competition. Particularly from Alaska. Race schedules fought over and agreed upon on are put in place the spring before the first snowfall. Once dates and sites are finalized, we look for the most economical way to go on tour. Plane ticket prices, AirBnB’s, truck rentals, and training opportunities are only a few of the central details factored into zig-zagging across North America. Cast in a rigorous academic calendar and the moving parts of our mobility machine rapidly multiply.

We’re now halfway through year-two of operating in a global pandemic. Adaptation and adversity greet you at every turn. Take your eyes off the road for a split-second and through the guardrail you go. February’s Denver University Invite was scheduled to be in Aspen on Feb 18-20, but a mid-year leadership change at the posh Colorado resort resulted in Aspen dropping the series altogether. DU’s coaches were left holding a broken bag and scrambled to find an alternate race venue. Not an easy task considering the dates are exactly over a busy President’s Day weekend.

Routinely, we fly two days prior to the start of a race series. If weather or mechanical issues force delays, we have options. It’s also nice to get a look at the race venue before sending it full gas down unfamiliar terrain. This was not to be. Our ride down to Denver was booked for Feb 16th. High demand for outbound seats coupled with pandemic related flight cancellations made existing reservations dicey, and there was no way to advance our departure date.

DU’s races were picked up by Copper Mountain and Keystone on the US I-70 corridor, and moved up by a day. This meant flying in and racing the next morning. This meant canceling our Aspen rental and finding “reasonably” priced accommodation during the busiest weekend of the year in Colorado’s overcrowded high country. This meant pain. We looked at renting RV’s, hitting up friends of friends for couch space, and high school gymnasiums. It became clear we would sweat this one out, until Anna found a few houses in a remote area above Boulder – over an hour from any ski area. Not ideal, but better than winter camping. 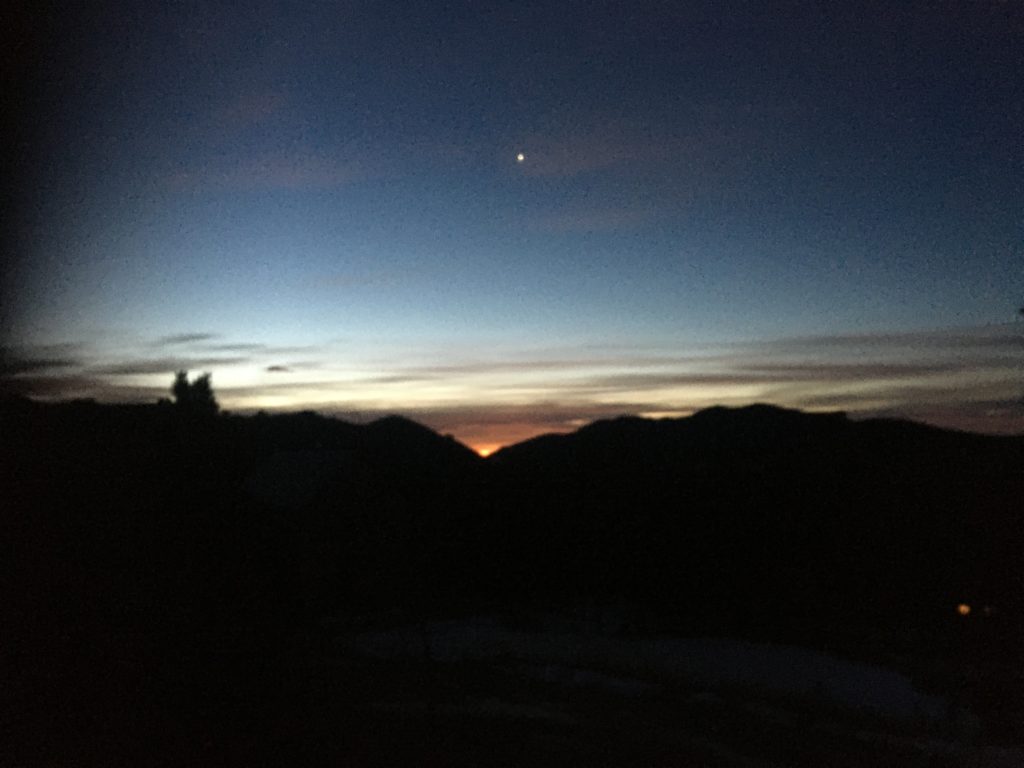 After an exciting approach into Denver International Airport, we touched down on time in horizontal snow and gusty winds. Navigating the crowded inter-terminal rail system, packed escalators, shoulder to shoulder moving walkways, and the Enterprise shuttle bus took just over an hour. Even with the elaborate process of getting from the jetway to the highway to the terminal, we still beat the Denver ramp crew’s lethargic baggage service. Ninety minutes after landing, we had three full size trucks loaded and strapped for the trip into the Front Range.

Peña Boulevard empties into I-70 ten miles past the terminal, and that’s exactly where we met endless thousands of other vehicles headed in the same direction. Fifteen miles took two hours and accumulating snow fell at a rate faster than our west bound crawl. There are plenty of places in Colorado I don’t mind visiting, but the I-70 corridor is not among them.

Our convoy edged off the choked interstate in Golden where we stopped for groceries and de-iced the windshields. A thick wet snow pasted the asphalt, and even our heavy four-wheel drive trucks struggled to find traction as we twisted up Golden Gate canyon in the dark. Thirteen hours after buckling into our slim airline seats on the ground in Anchorage, we pulled into our Black Hawk neighborhood 66 miles from Copper Mountain. The closest accommodation we could find.

The Copper series was tough. With light snow still falling, our 66-mile drive scaled into a full-blown expedition. Google professed the journey to take an hour and fifteen minutes, but chained-up tractor-trailers and bumper to bumper ski laden Subaru’s extended the elapsed time further. This made for some long-ass days. Forgettable results didn’t help morale. You can blame travel and logistics all you want, but the real issue was the skiing. We were just plain missing the pace.

We took a much-needed day off and followed it up with an early morning Slalom session at Eldora. It was the prescription we needed. Lapping the Chute Poma with CU, I felt like we regained some of our swagger. The next race was a Slalom at Keystone. A ski area I hadn’t seen in exactly 31 years, and the same hill where I last competed as a college athlete. Time flies when you’re having fun. 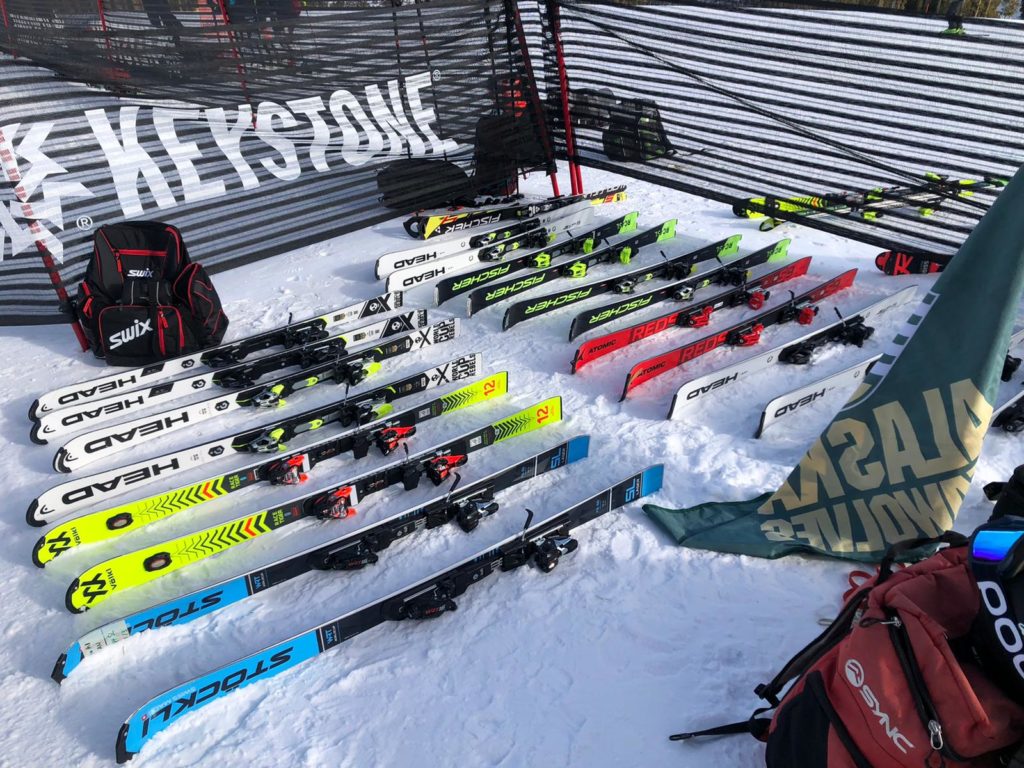 Keystone start pit. It wasn’t like this 31 years ago…

Our kids showed signs of life. Ashleigh would have been 4th on the first run with a late bib, but straddled the last gate. Crushing. Alyssa challenged the line in a play for the top 10, but got sucked late on the final pitch. Tina and Nicole skied well, but too safe. The guys battled. Moro made the flip 30 for the first time all season and we peppered the field like buckshot. We found a pulse, but missed the beat. Off to Steamboat and NCAA Western Regional Championships.

Traveling to the next venue on race day presents logistical challenges. We had to move out of our Black Hawk homes that morning…with everything. The truck beds are open and not secure. The weather forecast was for snow and wind. What do you do with 20 ski bags, 14 duffels, 10 large backpacks, two metal Zarges equipment containers, and two wax tables while you’re competing all day? You phone a friend.

Andy Leroy, the head coach at CU had already hooked us up with a Slalom session at Eldora and I decided to ride the hot hand. “Hey Andy,” I asked with a guilty fade. “Any chance we could park next to you at Keystone and lock up some bags – like all of them – in your team passenger vans for the day?” The proposal was accepted. After unloading and reloading apres race, we had three full size trucks loaded and strapped – again – for a trip into The Boat. Ski Town, USA. 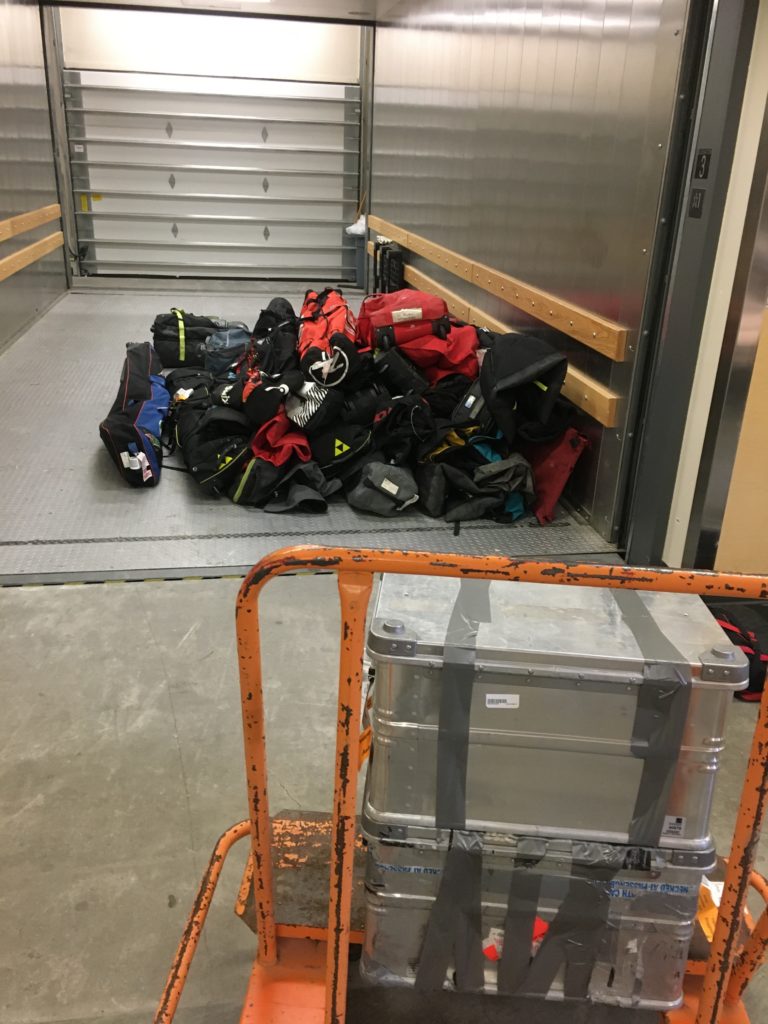 Rinse and repeat. Another snowstorm, another major grocery run, and another triple VRBO check-in awaited as we dropped out of Rabbit Ears pass on old highway 40. Moving with efficiency, the wax room was rebuilt, radios were recharged, video was uploaded, drills and timing equipment were prepped. Strategically, we had a day in between races. The team was excited for a critical GS training day and a shot at the race hill.

I checked the weather report and looked out the window before switching off my reading lamp. Light snow. I rolled to my side with fingers crossed and fell into a deep sleep. The forecasted two inches of light snow decided to have a party and litter the GS venue with eight to ten inches of their friends. Training cancelled. We got everyone into a neighborhood gym and kept the kids loose. At least we would be fresh going into the next four days of racing. 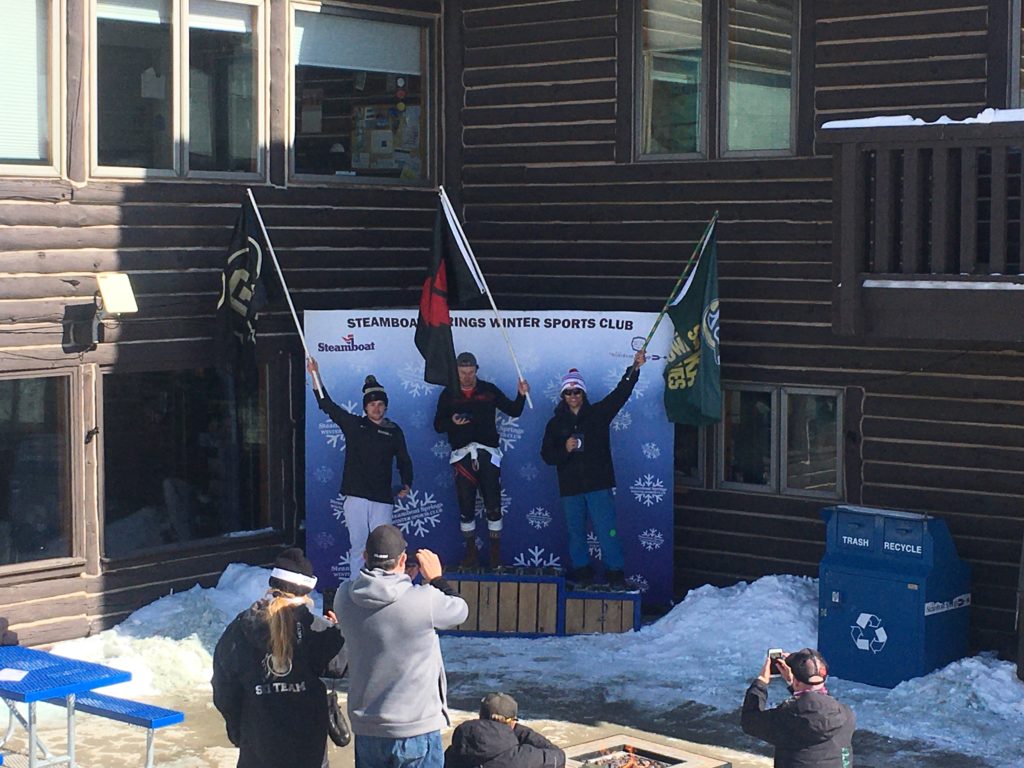 Didrik Nilsen. Second overall and captain of the winning team.

The races went well. Hunter and Jan had career best GS FIS results, and the rest of the team stepped up with quality finishes. In slalom, Leon missed a win by just three tenths and showcased his talent on a difficult hill. In the Dual Slalom exhibition event, Didrik led the guys to a team win and finished second overall. Progress infected the entire team and we saw a group that looked ready to compete for a championship. But like a football team attempting a fourth quarter comeback, we just ran out of clock. At the bell, we qualified six Nordic and four Alpine athletes for NCAA championships. It’s a competitive group, but we’ll need to be firing on every cylinder next week. I’d love to say that we’re following the road map I drew up in the fall, but those plans blew right out the window. Next week, we’ll need to blow the doors off. 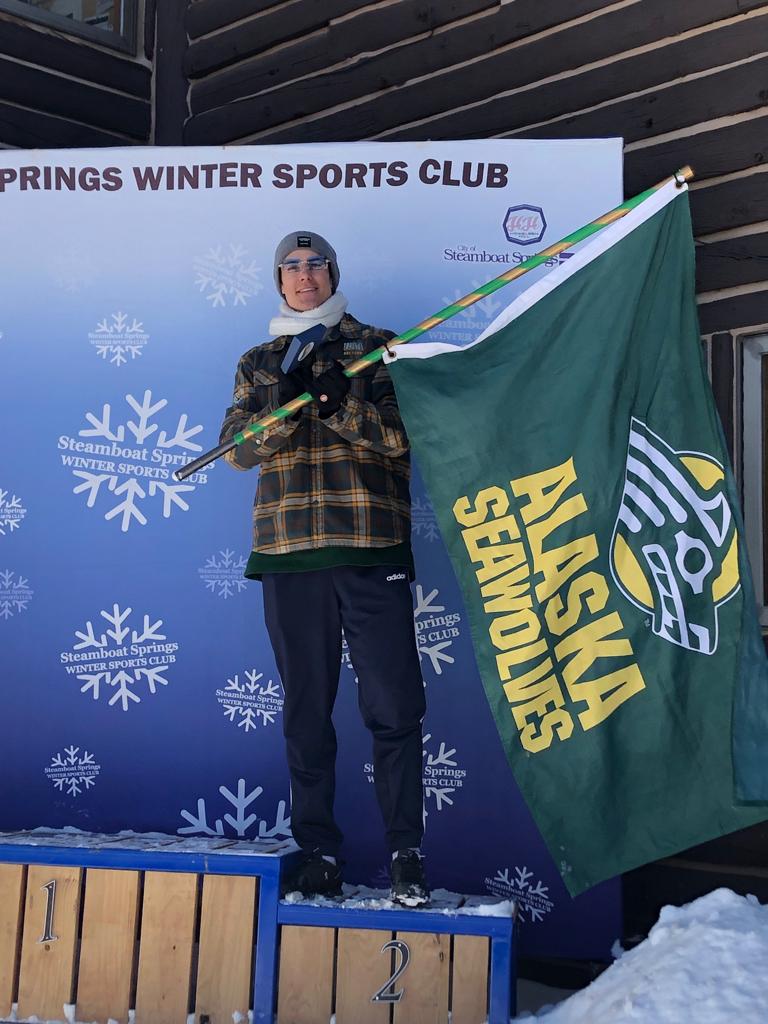 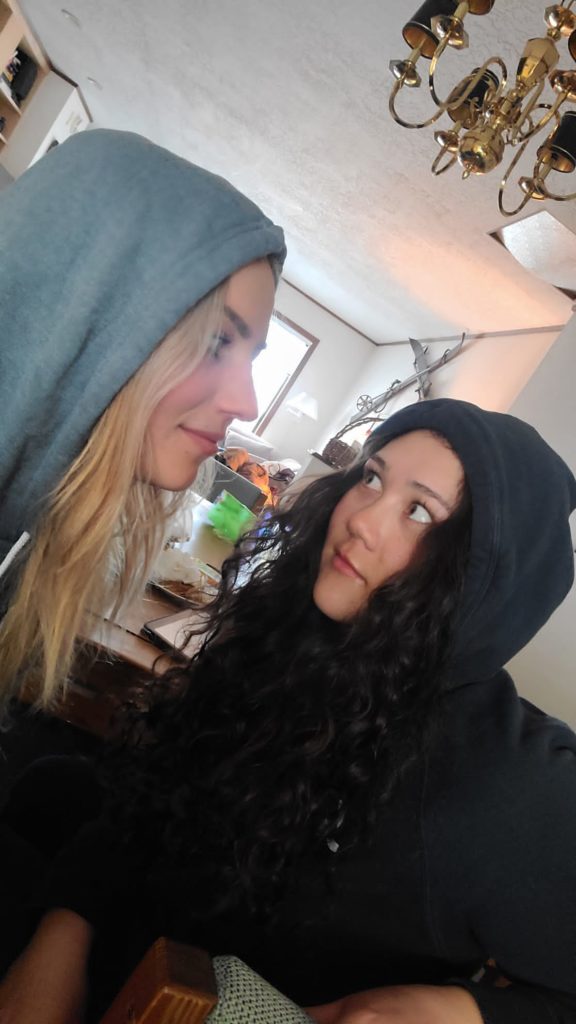 Tina and Ash. Locked in… 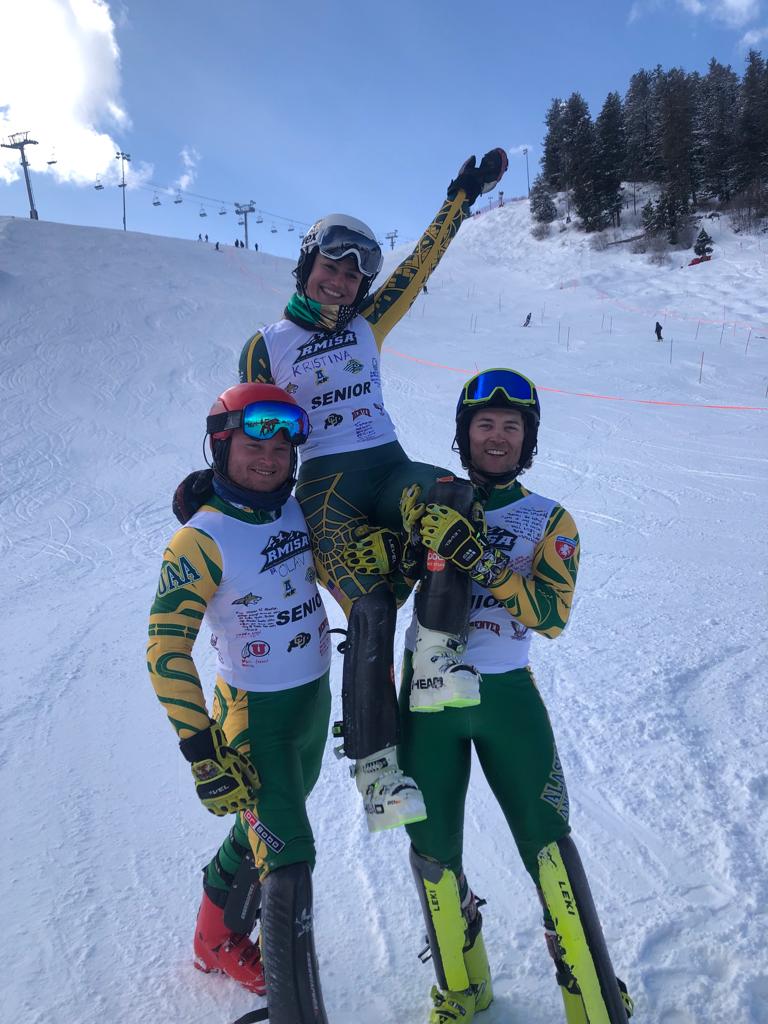